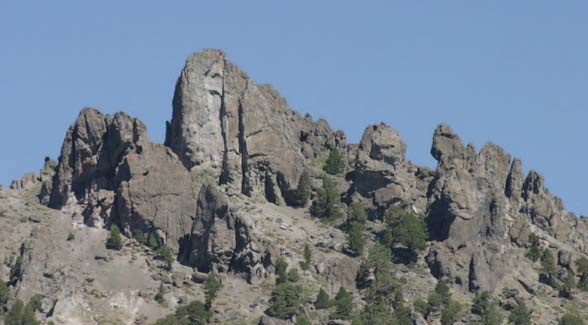 Northwest of the Byway are two interesting geologic features, Volcanic Neck and Upper Cascade Falls, located a couple of miles east of Kinney Reservoir. The jagged peaks of Volcanic Neck protrude through the remnants of flat-lying volcanic flows and sedimentary deposits under nearer hillslopes. This massive outcrop is thought to be a former volcanic vent, through which molten lava flowed. The massive build-up of pressure led to an explosive eruption, ejecting solidified fragments of rock and ash. Erosion removed the surrounding rock, producing a distinctive upstanding landform.

Upper Cascade Falls, located below the Volcanic Neck roaring down a steep wall, is generally visible only in the springtime, during the height of snowmelt.

Between Upper Cascade Falls and Silver Creek Campground the early route of the Big Tree and Carson Valley Turnpike is visible on the north side of Silver Creek, denoted by the rock retaining walls and steep grade. Also visible on the north side of the highway, midway on the winding route between the falls and the campground, is the geologic contact between the 83.9 million year old granodiorite and the seven-plus million year old volcanic Relief Peak Formation.

Take Note: This is a particularly winding and steep part of the Byway, so take caution when looking for Upper Cascade Falls and the Volcanic Neck. There are no parking sites or pull-outs at this location, but the falls are definitely worth seeking out in late spring or early summer.