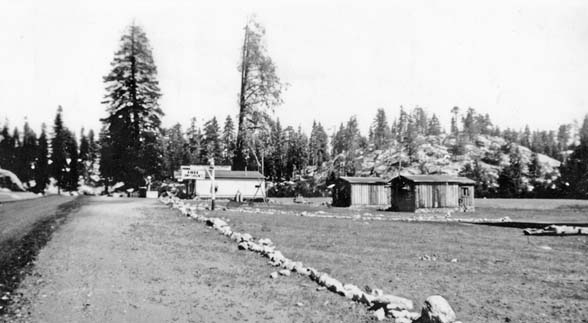 Tamarack is a tiny hamlet with a historic record—it is the site of the largest recorded snowfall in a single calendar month in the United States, a whopping 390 inches (32.5 feet) in January 1911. It also holds the U.S. record for having the greatest depth of snow on the ground at any one time—451 inches—nearly 37.5 feet. 450 inches of snow is the yearly average and in the winter of 1906-07, 884 inches fell, almost 74 feet.
Known originally as Onion Valley, the area was an early summer stock range named for its profusion of wild onions. In the 1860s and early 1870s, C. Brown operated a saw mill in the area, residing in a cabin on the west side of the road and creek. Over the ensuing years a number of people used the area for summer livestock pasturage, including sheepherder “Turkey” Johnson, Carlos Giacomo Fillipini and his son Dave, and Will and Charlie Gann. In the early 1920s, W.H. Hutchins erected the first store in a lease agreement, changing the name to Camp Tamarack. Located on the east side of the creek, Hutchins’ store also housed a dance hall for summer campers and visitors. In the early 1930s the Gann’s subdivided the section west of the creek into a summer home subdivision. The Hutchins building was destroyed by fire and, in 1934, William and Ruby Bracey purchased the land from the Gann’s and built a store and two rental cabins. After passing through a succession of owners, the present lodge was built by Mr. and Mrs. Harold Mosbaugh of Arnold, when they acquired the property in 1954.

Between Tamarack and Bear Valley, Emil Lombardi built a cabin in what is now called Sherman Acres, patenting the land in 1898. Known as Lombardi Meadows, the Mokelumne Hill family ran cattle there for many years, where Louis Lombardi built a new cabin.