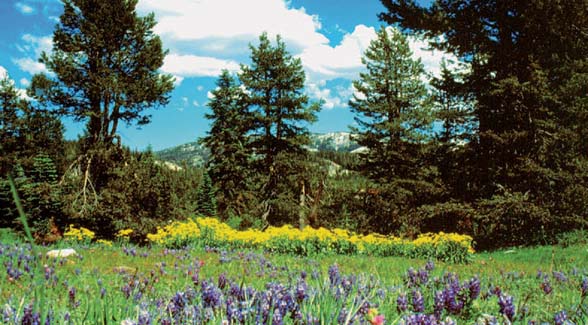 The Stanislaus Meadow is a hiker’s haven. The Stanislaus Meadow Trailhead begins in the meadow, a large and scenic opening along the headwaters of its namesake river, a tributary of the San Joaquin River. The trail then winds pleasantly into the Carson-Iceberg Wilderness through deep old growth forest and finally breaks into the granite slick-rock country below Bull Run Lake. The trails to Bull Run and Heiser Lakes are a system onto themselves and do not connect directly with the rest of the Calaveras District trail system. Another trail follows the old Turnpike to Mosquito Lakes.
During late spring and early summer Stanislaus Meadow is graced with prolific wildflowers, offering memorable photo opportunities. As you travel in this area you’ll see the Mokelumne Wilderness to the north and the Carson-Iceberg Wilderness area to the south.

An old cabin and the presence of many barked trees in Stanislaus Meadow are evidence of an early day dairy operation, as ranchers stripped bark from Lodgepole pines to make cheese molds. In the 1920s the U.S. Forest Service created a tract to accommodate the grazing use of Leslie Hunt of Linden, whose interests were later transferred to Don R. and Don J. Whittle.

The Stanislaus River was originally named Rio Nuestra Senora de Guadalupe by the Moraga Expedition of 1806, called the Appelaminy by Jedediah Smith in 1827, and re-named Rio Estanislao in 1829 for a MiWuk Indian who escaped from Mission Santa Clara and returned to his homeland on the river. It was finally anglicized to the Stanislaus River by Frémont in 1844.