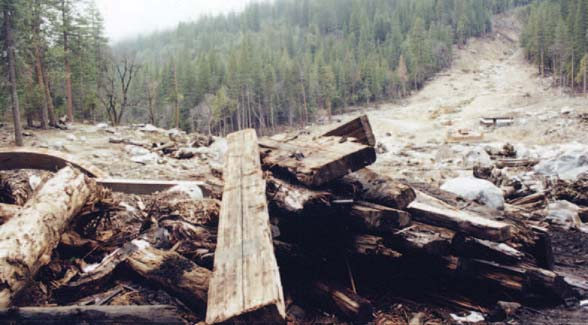 Thousands of years ago, a retreating glacier left an enormous moraine deposit, forming Summit Level Ridge on the upslope (north side) of Highway 4, about 3.5 miles east of Dorrington. On New Year’s Day in 1997 these unconsolidated deposits of dirt and rock became saturated by water during an unusually wet series of winter storms (100-year storm event), and the hillside gave way. An estimated 65,000 cubic yards of material slipped off the ridge and flowed downhill and across Highway 4, picking up dirt, rocks, boulders, trees, and vegetation as it went.

Initially traveling at approximately two miles per hour, the debris flow picked up size and speed as it moved downhill, eventually reaching an estimated 12 miles per hour before approximately 191,000 cubic yards of material crashed into the raging North Fork Stanislaus River two and one half miles below. The sheer force ripped the steel and wooden bridge at Sourgrass from its footings, flipping it onto the opposite bank in twisted pieces, which can still be seen.

The old Sourgrass campground, picnic area, and newly constructed river overlook trail on the south side of the river were also completely destroyed. The slide left a 100-500  foot-wide swath of forest completely denuded of vegetation and scoured the drainage  channel to bedrock in some places. Although the slide area has naturally regenerated over the years, the upper mile of the slide is still visible on both sides of the highway. Look for a  patch of forest with obviously much younger and smaller trees than surrounding areas.