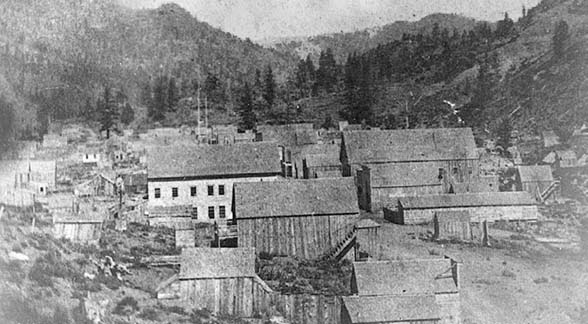 Silver Mountain City, first named Konigsberg after a silver mining city in Norway, was founded shortly after Norwegian prospectors made a silver strike about 1861. By 1863, when the population swelled to over 1,000, the name was changed to Silver Mountain City, and the town was designated the county seat when Alpine County was formed in 1864.
By 1868, however, the boom was over and the population had dwindled to about 200. Mining activity was moved to Monitor where a new strike promised more wealth. All that remains today are the stone walls of the jail; the cells were removed to Markleeville when it became the county seat in 1875. The Fisk Hotel, built about 1863, as well as much of the lumber from Silver City, was taken down and moved to Markleeville in 1883 and the hotel was renamed the Hot Springs Hotel, where it still stands today housing the Wolf Creek Restaurant. As you walk around the site of Silver Mountain City, do not remove any of the historical artifacts; they are the only remnants of this once flourishing boomtown left to tell its story to future generations.

Take Note: Each year in the summer or early fall the Alpine County Historical Society marks out the buildings that once occupied Silver Mountain City, and you can actually “tour” the town. The tour is free (donation to the museum is requested), but you must call to reserve a spot. Maps of the Old Silver Mountain City are also available at the Alpine County Museum. For information, call the museum at (530) 694-2317 or visit scenic4.org for a downloadable map.