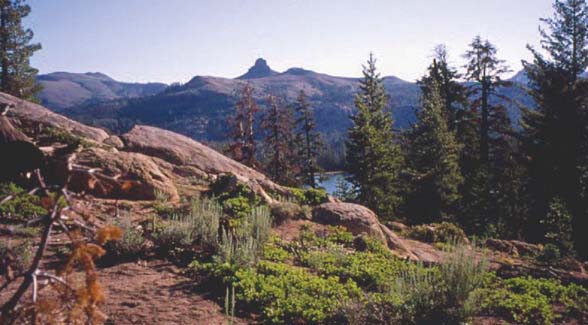 A marker for G. Elmer Reynolds, the executive editor of the Stockton Record in the 1920s and an avid conservationist, was placed at the trailhead the year following his death in 1928. His namesake, Reynolds Peak, is visible to the west.

Take Note: Long-term parking for day and overnight use is available in the parking lot at the
south trailhead. A limited number of short-term spaces for day users only are available at the north trailhead. Do not park at the trail crossing.

The PCT is best known for its long-distance backpacking opportunities. However, a number of great day hikes are available from the two trailheads at Ebbetts Pass. To the north, the trail follows scenic, rolling terrain about three miles to Upper Kinney Lake, passing smaller Sherrold Lake along the way. Hardier hikers can follow the trail southerly as it enters the Carson-Iceberg Wilderness and climbs about four miles to Noble Lake and beyond, affording spectacular views of Noble Canyon and Highland Peak, as well as a profusion of wildflowers in mid-summer.