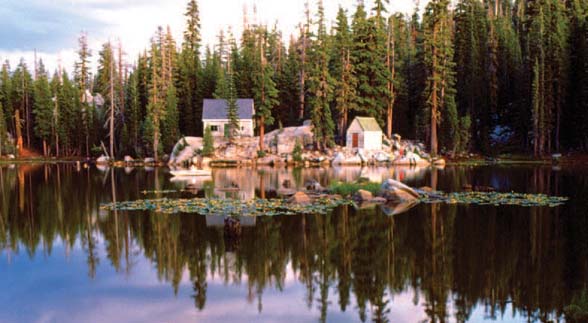 These two shallow, reflective alpine lakes are especially popular with photographers and anglers who enjoy fishing for trout from the rocky shoreline. When conditions are just right and the winds are calm, the lakes turn into a glassy mirror-like surface, reflecting the blue sky, tall trees, granite boulders and picturesque summer cabins on the south shore of the lake. The two lakes drain into different watersheds—the western one into the North Fork Stanislaus River, the eastern into Pacific Creek and then into the North Fork Mokelumne River. There are two small U.S. Forest Service campgrounds at Mosquito Lakes, and some sites are on the actual historic Emigrant Trail.

In the 1920s the Angels Camp Booster Club was looking for a site in the mountains for their “high jinks,” so Angels Camp druggist Harry Barden, dentist Charles Smith and wife Amelia, Dick Raggio, and others settled on Mosquito Lakes. Named “Camp Kilkare,” at that time the lakes were just shallow snowmelt lakes filled with mosquitoes. When the highway department realigned the old turnpike closer to the lake, Harry Barden and his cronies constructed a concrete dam between the lakes, raising them for swimming and fishing. A segment of the original Emigrant Road can be seen north of the present route.
Immediately east of Mosquito Lakes is Pacific Summit, known as the “Second Summit” on the Big Tree-Carson Valley Turnpike. The 5,000-foot level was called the “First Summit” and Ebbetts Pass, the “Third Summit.” A spectacular view of the U-shaped Pacific Valley is visible below the summit, as are Raymond and Reynolds Peaks to the northeast. Another pull-out on the way to Pacific Valley offers a view north toward the Carson Pass area and Jeff Davis Peak and a geologic featured called the Nipple.

Take Note: Mosquito Lakes is a small area and very popular on summer weekends; camp sites and fishing spots fill quickly. Also, drive cautiously in this area as there are frequently pedestrians or people sitting on the narrow shoulder next to the lake.