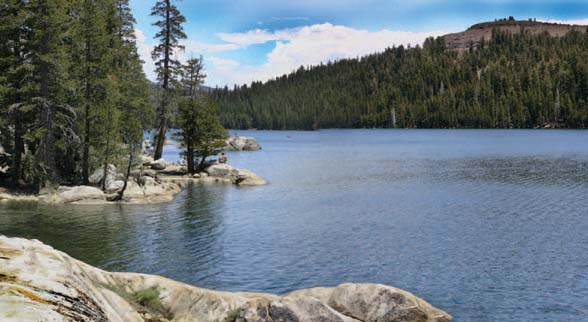 Lake Alpine is a year round destination with swimming, camping, canoeing, kayaking, low-speed boating, picnicking, mountain biking, and hiking during summer months and cross country skiing, snowshoeing and snowmobiling in the winter. A trail, approximately two miles of which is paved and wheelchair-accessible, loops around the lake, while several other trailheads are located at either end of the lake. Lake Alpine Lodge provides lodging and visitor amenities including a restaurant and general store during non-winter months.

Originally known as Silver Valley Reservoir, Lake Alpine was created in 1892 when the Utica Mining Company, requiring ever more water for its mining operations in Angels Camp, dammed the waters of Silver Creek. The lake flooded the valley, as well as portions of the old Emigrant Road and Big Tree-Carson Valley Turnpike. At the foot of the valley was a well-known stopping place that was the eastern end of Miller’s Express Stagecoach Lines, where the mud-wagon and pack train routes completed the trip east.

The “Stone House” on Dynan’s Cove was built as a supply cabin by the Utica Mining Company during construction of the dam and is now a private residence. The old road (Slick Rock Road) that passes by the house was used to haul supplies to the Utica and Lake Alpine Dam worksites during their construction.

The Lodge at Lake Alpine Resort was built by B.R. Gianelli of Murphys in 1927-28 but collapsed under heavy snow in 1932. Only the large stone chimney, built by legendary mountain man Monte Wolfe on the west side of the building, remained. The lodge was then rebuilt as the one-story structure that is in operation today. Summer home plots were laid out in 1925 and cabins were erected beginning in 1928 and continuing through the  1930s and 1940s on land leased from the Stanislaus National Forest.

Take Note: Highway 4 closes just beyond the Mt. Reba turnoff (Highway 207) in winter. A SNO-PARK provides access to groomed snowmobile, cross country, and snowshoe trails to Lake Alpine and beyond.