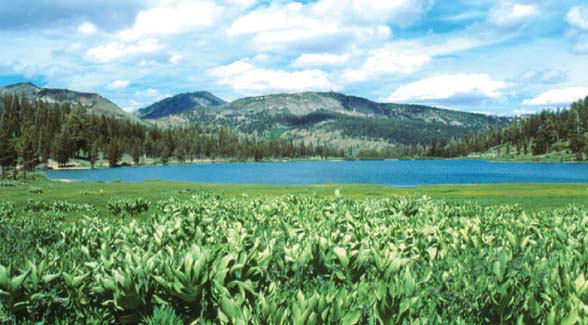 Highland Lakes are located at the end of Highland Lakes Road, seven miles off Highway 4. The twin lakes are set in a spectacular high alpine valley, close to the top of Ebbetts Pass at an elevation of 8,600 feet. U.S. Forest Service campgrounds are located at Bloomfield, where the road changes from paved to a rough dirt road (with some washouts), and two scenic campgrounds at Lower Highland Lake. Trails to Folger Peak, Hiram Peak, Asa Lake, Hiram Meadow, Spicer Reservoir, and the Pacific Crest Trail at Wolf Creek Pass depart from various points in the area.

These two lakes are unique in that they are headwaters for two different major watersheds: the eastern lake flows into the Mokelumne River drainage, while the western lake flows into the Stanislaus River drainage. Capped by ice in the Pleistocene era, glaciers poured out in all directions from Highland Lakes to form steep canyons, leaving a remnant snowfield on the south side of Lower Highland Lake that rarely melts in summer.
As early as 1864, the small community of Highland City had been established on the southeast side of Upper Highland Lake among many mines, a short-lived affair like so many other eastern Sierra mining communities. Mostly built of log shanties with rough stone fireplaces, only a few of the structures had stone foundations, some of which remain to mark the location today.

Surveyed by the Forest Service in 1920, only two lots were laid out in the Tryon Meadow tract, located about one mile north of Highland Lakes, both for cattle operations in the area. They included the Tryon cabin and outbuildings on the west side of the road to Highland Lakes, now occupied by the Wooster family, and the Carley/Raggio cabin and barn on the opposite side of the road.

Take Note: Highland Lakes Road is a narrow, steep and winding dirt route where safe travel speeds average 20 mph or less. High clearance vehicles are recommended. Late summer is the best time to visit, when a profusion of wildflowers are at their peak.