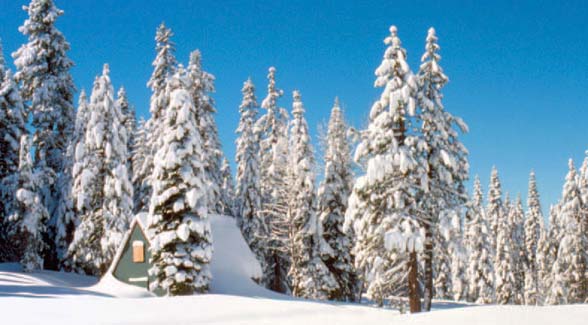 Gann’s Meadow was settled in the 1870s by George, Jackson, and William Gann, who arrived in California from Missouri in 1853. First engaged in the cattle business in San Joaquin County, they eventually acquired a ranch in Calaveras County north of Salt Spring Valley on the old road to Spring Valley (near present Valley Springs). Their summer cow camp, located on the Big Tree and Carson Valley Road, soon became known as Gann’s Station.

The 160-acre ranch was homesteaded by Charles A. Gann in 1902 and patented in 1910. A summer home tract, the 38-Mile Tract, consisting of six lots along the western side of the Ebbetts Pass Road, was laid out by the Forest Service in the 1920s. It later became known as the “Gann’s Trespass,” where homes were built on land sold by Charlie Gann in good faith, but actually on national forest lands.

The three stone and frame cabins on the north side of the road are all that remain of Bailey’s Resort, a popular summer recreation area in the 1920s. The main lodge burned in later years, and its location is now beneath the highway. A modern residence and restaurant were built on the southwest end of meadow in the late 1960s to cater to travelers to the Bear Valley Ski Area, but has been vacant for many years. Once the cattle were removed from the area, the meadow, which had previously been kept open by Native American coppicing and burning, as well as natural fires, filled in with native conifers.