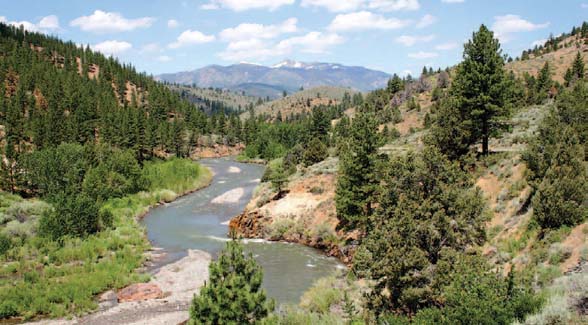 The East Fork of the Carson River is a popular fishing area, where a pure strain of Lahontan cutthroat trout, a threatened species, can be found. Hot springs along the river also make this a special trip for river runners, kayakers and rafters, especially during spring run-off. Other recreational opportunities include hunting and four-wheel driving outside the Wilderness areas. Historic sites and areas of natural and geologic beauty abound in the river canyon, which is especially colorful in the fall of the year when the Cottonwood, Willow and Aspen turn brilliant yellow and orange.

The river is recognized as one of only two major free flowing rivers on the eastern Sierra. The 10.2-mile portion of the river from Hangman’s Bridge to south of Markleeville is designated “scenic” under the California Wild and Scenic Rivers Act.

The East Carson country has a rich cultural heritage. People have occupied this area of the eastern Sierra for 12,000 years, using the area for habitation, hunting, fishing, and gathering plants. The Washoe tribe was predominant in this region, some traveling over Ebbetts Pass in summer for high country amenities.

The Carson River was named for famed explorer and guide Kit Carson, who, with John C. Frémont, accomplished the first non-native mid-winter passage over the Sierra in February of 1844. During the Comstock boom, timber was cut in the mountains and hauled or flumed to the East Fork of the Carson River from where it was floated down to Empire, Nevada, to be hauled by railroad to the mines at Virginia City. Men in piroques (flat boats) followed the wood drive down the river, using picaroons to manipulate the logs. The largest drive in those days was said to have contained about 150,000 cords of wood, filling the river up to six feet deep for a distance of four and a half miles upstream.

The gorge of the East Fork Carson River was formed by an 18-mile long glacier at the base of 11,500-foot Sonora Peak that scoured the canyon, leaving behind riverine terraces with round boulders as it melted. Caves, formed by volcanic lava tubes, that sheltered Native Americans and later stockmen and campers, are located on the west side of the East Fork Carson River at Hangman’s Bridge. A major flood in 1997 scoured the canyon, eroding the road and leaving stream boulders high and dry.

One interesting historic site in the river canyon is Hangman’s Bridge. According to local lore, in 1874 a man named Ernst Reusch was accused of murder in Alpine County. In order to spare the financially-strapped county the expense of a jury trial or change of venue (sought because it was thought that Reusch could not get a fair trial in Alpine County), some local vigilantes took justice into their own hands while the prisoner was being transported to neighboring Mono County for trial. The armed men stopped the escort at a point near Markleeville on the East Fork Carson River, and ordered the prisoner out. They then put a noose around Reusch’s neck and dropped him over the side of the bridge.
The old bridge was replaced by a new bridge about one mile downstream. However, the legendary name stuck, and the area is now a popular put-in spot for rafters and kayakers paddling the East Fork Carson River. It is managed by the Bureau of Land Management. Camping, housekeeping cabins, and provisions are available at the rustic Carson River Resort.

The Carson River Wildlife Pullout (Mile Markers: 59.8/1.2 to 53.7/7.3) is a scenic stop along the river and a popular place for “catch and release” fishing for wild trout. Bald eagles, deer, river otters and a wide range of birds can be sighted along the river.