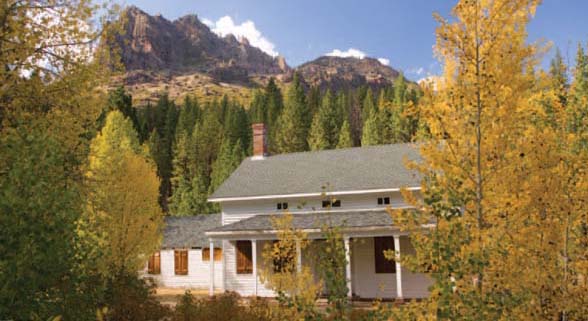 Daniel Davidson established the first smelter and home on the site in 1862; the tall brick smelter is one of two which were once used to smelt the ore from the nearby mines. In 1870, the mill and house were purchased by “Lord” Lewis Chalmers, who came to Alpine County from Scotland in 1866 to develop silver mines for investors in London, leaving his wife and five children behind. After several failed ventures, Chalmers acquired mining property near Silver Mountain, including a sawmill and eight-stamp quartz mill. He renamed it the Exchequer, and built himself a fine home, which came to be known as Chalmers’ Mansion, nearby. 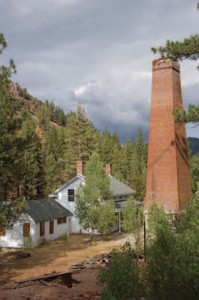 His brother, John Chalmers, came to America to help manage the mine, but as the silver ore proved to be elusive, the Chalmers brothers had a hard time making a profit from their mining venture. By then a widower, Lewis married his housekeeper, Antoinette (Nettie) Laughton, in 1880, having two more children with her. By January 1884, with his mines shut down and creditors demanding sale, Chalmers returned to England to try to raise funds to back his ventures, leaving his family in Alpine County. He never returned, dying there in 1904. Nettie died in 1913 and is buried in the small pioneer cemetery (across the highway and about one-half mile west of the Chalmers Mansion), along with Lewis and Nettie’s young son, Nettie’s first son from a previous marriage, and Lewis’ oldest son from his first marriage. Souvenir hunters stole the tombstones many years ago.

Take Note: This site is private property; please do not enter.