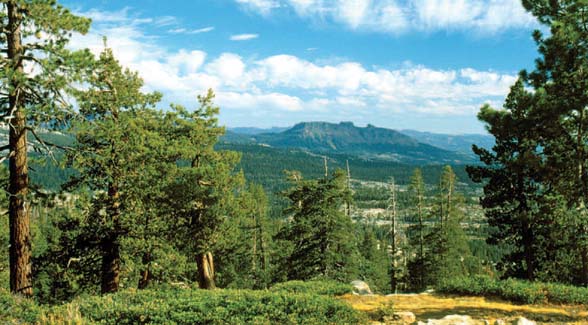 The Cape Horn Vista is one of the crown jewels on the Ebbetts Pass National Scenic Byway. From here, you can see one of the most panoramic views of the Dardanelle formation, as well as expansive views of the Carson-Iceberg Wilderness, Union, Utica, and Spicer Reservoirs. Lookout Peak is visible on the far left. Notice the silhouettes of the “sleeping lion” and “elephant” on top of the Dardanelles, and the gnarled, twisted trunks of western juniper trees on the exposed, south-facing slope below.

Ten million years ago volcanic material covered this area to a depth of 2,000 feet, with the Dardanelles formed in the depths of a river valley when basaltic flow after flow filled and solidified in the channel. Extensive glacial and other erosion removed the surrounding volcanic material, leaving the very resistant lava river rock high above the surrounding topography, a process called inverted topography. The Dardanelles today stand over 2,000 feet above Spicer Reservoir and the Stanislaus River basin.

The Western or Sierra Juniper (juniperus occidentalis var. australis), with its relatively short twisted, and weathered trunks, is found on rocky, wind-exposed slopes making for very dramatic scenery where abandoned, dead branches strike defiant gestures against the sky. Juniper bark has a “redwood” look but is much hairier and not spongy. The spineless leaves are scale-like, while the so-called juniper “berries” are actually the cone of the juniper.

Originally, the old road above Lake Alpine climbed straight up Stroble Hill and over the top of Cape Horn, an extremely steep route. Alpine County later cut the present route, which was dubbed “The Straits of Magellen” by Grant Merrill of the Alpine County Division of Highways, as it ran around Cape Horn.

Take Note: Off-highway parking is very limited. Make sure your car does not obstruct the roadway before leaving your vehicle.