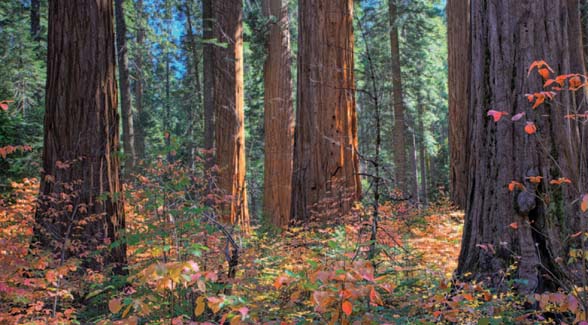 Calaveras Big Trees State Park is located four miles northeast of Arnold on Highway 4. The Park is home to the North Grove, the pristine South Grove, the raging North Fork of the Stanislaus River, and tranquil Beaver Creek. Open year-round, the park offers 129 campsites, picnic areas, miles of hiking and biking trails, and a visitor center.

The North Grove contains about 100 mature giant sequoias; the South Grove, about 1,000. These magnificent trees, the largest in the world, are believed to live as long as 2,000 years. A gentle, 1.5-mile nature trail winds through the North Grove allowing visitors to marvel at these magnificent giants. More ambitious hikers can take the five-mile self-guided interpretive trail through the South Grove, where they will encounter these enduring giants in their natural environment and see the largest tree in the Park, the “Agassiz” tree (250 feet tall and over 25 feet in diameter at six feet above the ground). Sugar pine and mountain yew also grow prolifically in the park, with abundant dogwood trees providing a remarkable show of color in the spring and fall.

Although credit for discovery of the Big Trees was given to Augustus T. Dowd in 1852, several emigrants over the route had recorded them in diaries dating from the mid-1840s. But Dowd, a trapper for the Union Water Company, was the first to promote the discovery, which created tremendous excitement throughout California and the world. The “Discovery Tree,” first noted by Dowd in the North Grove, measured 24 feet in diameter at its base, was 363 feet tall, and was determined by ring count to be 1,244 years old when felled. The bark was stripped from the tree in ten-foot high sections, marked for reassembly, and taken on public tour around the world. The still-visible stump became a popular spot for cotillion parties, picnics, and other gatherings, with an elegant pavilion erected in 1856. Muir’s description of the felling of these magnificent giants helped fuel the modern conservation movement.

The Mammoth Tree Hotel was constructed in 1853 to serve the increasing number of  visitors flocking to the area to see the Big Trees. In 1860, James L. Sperry and John Perry, owners of a hotel in Murphys, bought the property and later constructed the new Mammoth Grove Hotel, which was the center of social life in the North Grove until it burned in 1943.

Interpretive programs are offered during the summer months. Cross country skiing and snowshoeing, including guided snowshoe hikes, are popular winter activities. Leashed dogs are welcome in picnic areas, campgrounds, and roads; however, dogs are not permitted on trails.

Take Note: Three Senses Trail, one of the earliest accessible-designed trails in the State Park system, offers 600 feet of accessible trail, allowing visitors to experience the smells, sights and sounds of the forest. It includes guide ropes and interpretive panels in English and Braille. Accessible parking spaces, campsites and restrooms are also available. The North Grove Trail is considered barrier-free.