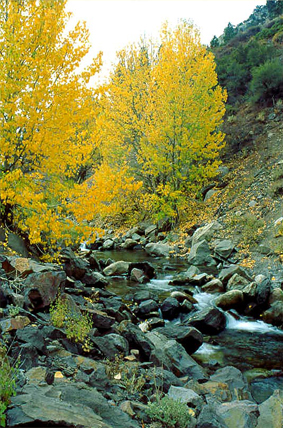 Welcome to one of the most intimate and untamed trans-Sierra routes — the Ebbetts Pass National Scenic Byway. Jutting up from the heart of the Sierra Nevada with Lake Tahoe and Yosemite National Park as its neighbors, the byway is a 61-mile stretch of Highways 4 and 89, in between the towns of Arnold in Calaveras County and Markleeville in Alpine County, California.

Ebbetts Pass is a vital link to spectacular Central Sierra attractions, including two state parks—Calaveras Big Trees and Grover Hot Springs State Parks—as its “bookends,” the nationally-recognized Pacific Crest Trail, the Stanislaus and Humboldt-Toiyabe National Forests, the Carson-Iceberg and Mokelumne Wilderness areas, the North Fork of the Stanislaus, Mokelumne and StateYour Guide to the Ebbetts Pass National Scenic Byway 5 designated East Fork of the Carson rivers, and Bear Valley cross country and downhillski areas. With a range in elevation from approximately 4,000 to 8,700- feet, this winding mountain pass through the “California Alps” in their most natural state allows visitors the awe-inspiring experience of having the threshold of the Sierra literally at their feet.

The driving experience on this narrow asphalt ribbon is like no other, providing an exceptional and intimate high country experience. As most of the byway is surrounded by national forest and wilderness areas, recreational opportunities are the mainstay of the Ebbetts Pass region with hiking, backpacking, camping, biking, kayaking, canoeing, fishing and swimming during the warmer months, and crosscountry and downhill skiing, snowboarding, snowshoeing, sledding and snowmobiling in the winter.

Unlike any other Sierra pass, it is silver that built Ebbetts Pass. With the discovery of gold on the western slope of the Sierra Nevada, Native American trails were transformed into dirt roads by fortune seekers heading west. In 1861 the route reversed direction and became a booming toll road transporting silver miners to the east side Comstock Lode. Calaveras Big Trees was also a main attraction early on and continues to be one of California’s most soughtout destinations. Ebbetts Pass, first surveyed in the 1850s as a possible railroad crossing for the Atlantic and Pacific Railroad Company, is one of the oldest trans-Sierra routes with many rich stories. The national conservation movement gained strength when John Muir visited Big Trees, and became outraged after witnessing the stump of a behemoth Giant Sequoia that had been felled and its bark stripped and taken on a tour as a traveling exhibit.

Ebbetts Pass was designated as a California State Scenic Highway in 1971 and was honored with National Scenic Byway status September 22, 2005 by the U.S Department of Transportation in Washington D.C. It is one of only seven nationally-designated byways in California and 151 in the nation.

Let this site be your guide to the stunning sights and friendly feel that can only be found on the Ebbetts Pass National Scenic Byway. A full-sized folded map is bound at the end of this guidebook that outlines 38 key points of interest, campgrounds, lakes and rivers, as well as major roads and trails. In the pages that follow you will learn about how Ebbetts Pass was formed, both geologically and historically, as well as flora, fauna and recreational opportunities. Slow down and savor the Sierra!